Ah, yes. That ol’ Zen koan (philosophical riddle)– What is the sound of one hand clapping? Is it something? Is it nothing? If a tree claps in the woods and know one hears it, did it HAPPEN?? What is the point this riddle anyway? As far as I’m concerned trying to figure this silliness out is:

“Clapping” is boring. Especially trying to clap with one hand. Isn’t that just finger tapping on your palm? I mean clapping is really just a precursor for hitting things anyway isn’t it? If you think about it, clapping is just slapping yourself. Don’t get me wrong, slaps aren’t a bad thing. Everybody needs a good slap now and again. Take this slap for instance:

But, don’t you think Batman would rather punch pretty boy Robin straight in the thinker rather than tickling his cheeks with a piddling excuse for a strike? I’d say slapping is kinda like the T-Ball of hitting, whereas punching, well that’s major league stuff. If nothing else, the movies (and some TV shows) have taught us that when all else fails, punch ’em fast, hard, and right between the eyes. But only once, and with one hand. Which brings me back around to our original question: What IS the sound of one hand punching?

One thing’s for certain, martial artists of ALL kinds enjoy hitting things. After all, the point of anything related to war, hence the term martial, involves striking and destroying other things, and sometimes other people. We train to hit fast, hard, and with precision. We spend literal HOURS throwing our fists, feet, legs, arms, tips of weapons, and sometimes heads at stuff…and ENJOY IT. We might walk away sore, covered in bruises, but we love it and find it fun. So of course, one of the greatest highlights in any movie involving fighting is the sound of punches being laid on a bad guy. In our collective fever dreams of greatness, we too want to look and sound as awesome as THAT hero on the screen as we knock them to kingdom on their assess.

With the certainty of victory, and an embellished soundtrack, I present you The SOUND of One Fist punching.

The desire to practice a martial art is a bit like a madness that takes over your entire being. Your soul starts to burn for more horse stance while your body and mind agree that that your soul needs a chill pill. However, not all the signs of this kind of lunacy are quite so obvious and one might wonder if they have taken the red pill, instead of the blue.

END_OF_DOCUMENT_TOKEN_TO_BE_REPLACED 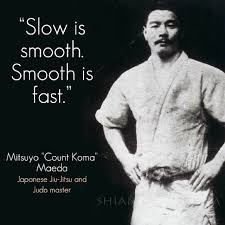 Special groups often have lingo that only the members know. Shorthand, code, and special terms are flung around like shuriken (aka throwing stars for you non-ninjers). So, in the company of martial arts groups you might hear a few things that require interpretation.

END_OF_DOCUMENT_TOKEN_TO_BE_REPLACED

Lately, I’ve been acquiring weapons like the local Cat Lady acquires felines. I have a good reason, I’m going to start teaching women’s self-defense soon and need good recommendations for useful weapons. Of course, I also realized my personal arsenal was a bit, um, puny and I needed to up my flexing game with more wood and metal clout. Or maybe I’ve developed that disease that martial artists get once they become serious about their art: Armamentilepsy– The disease that causes an overwhelming desire for the possession of weapons that leaves you broke, but slobbering in anticipation of the UPS truck. Whatever the case, Mama’s got some new toys (rubs hands in glee with a ridiculous and slightly scary grin).

I recently acquired from a wholesale company, a slapjack (or some call it a beaver tail), a black jack, and a telescoping baton. I was showing my new toys to my husband, and, as he handled the baton, he said, “Be careful, or you’ll poke your eye out with that!” He hates “A Christmas Story,” but I LOVE it. And of course, he would never deliberately quote a movie he hates, but he said it, and now he’s stuck with it, and so are you.

Welcome to the Modern Kunoichi’s Guide to Weapons Handling.

We all know that as soon as one gets a new sword, one should immediately whack things with it. And, if you and your buddy both get swords, then, by golly, get out there and have a sword battle. Get a new knife? Stab as much stuff as you can, but don’t let your mom see it or she’ll tanny your fanny.

But, we have to keep it safe guys and know how to handle these weapons or else you might be this guy…

When you get that Highlander replica katana, or, that war hammer you’ve slobbered on your keyboard over finally arrives and gosh-darn-it, after you excitedly rip open that Amazon packaging you find that the edges on said weapons are as dull as Grandma’s butter knives. Time to get out the sharpening stones? Or, no? Chances are, if yourself in the ER getting shrapnel picked out of your hiney, it’s a no-go.

Look, if Paul Bunyan can carry around a giant wood axe and not maim Babe the Blue Ox, and if Moses can carry a big stick without tripping every last Israelite, you can secure your weapon too. That especially goes for all you non-chuckers. Just cause it has a rope-de-do in the middle doesn’t mean you have to swing it, and hit yourself in the head. SECURE THAT WEAPON (i.e. Put it back on the wall where it belongs. And for Lee’s sake, get some lessons you chucker-head!).

Tip #3: Just Because You Can, Doesn’t Mean…AW! What the Hell, Bonehead?

“Just put the gun down and back away from it. That’s it, put it on the ground nice and slow. Easy now, eeeeaaaaassssy. Yep, now back away. 10 paces please. Alright, stop right there. Can somebody get Bonehead here a towel, and some ice? You know what, better get that branding steel and torch too, we gotta gusher! Hey Fred! Fred! Get over here and secure that weapon right now! I mean it Fred! And don’t let Bonehead near it again! I blame you Fred! I. Blame. You.”

There you go folks! Just follow these three easy steps and you’ll be safe forever!

Two weeks ago I was marveling at the amount of bruises I acquired on one arm. Because I skipped a week to go on vacation, I decided you really need a new “how-to” manual. I mean, that’s why I’m here, to tell you how to do things, right?

END_OF_DOCUMENT_TOKEN_TO_BE_REPLACED

Achieving empowerment, healing, and safety with mind and body training.

The Little Fighter With A Big Heart

Muay Thai and me

Notes of a Martial Arts Apprentice